Congratulations to the crew that worked at MarsCon this year! It was a great success, for several reasons.

First, we saved lives!! Thanks to Jane, Roxanne, Cathy, and all the fabulous blood donors, we exceeded our MarsCon collections goal for the second time ever, and the first time since 2013! We had several fun gifts to give to donors, including armed forces emergency survival blankets and Game of Thrones Bleed for the Throne t-shirts. Plus, every donor was entered to win a trip to the Game of Thrones premier in April. Best of all, they each received the coolest - and hardest to get - badge ribbon at con! Thanks to everyone, we can touch up to 72 lives with our efforts!

Second, we had an AWESOME party room! The Spectre of the Gun theme worked out really well, and was very popular. We really fit the convention's theme of Legends in Our Own Minds! 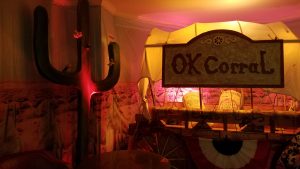 The OK Corral, with it's flickering firelight, covered wagon, and towering cactus, was really cool. Wyatt and Virgil Earp could be found there, along with Doc Holliday. We also had a saloon with barmaids, plus well-armed Starfleet personnel. The saloon was servin' up sarsaparilla, and it was a huge hit. Each MarsCon guest of honor was honored by us, appearing on a Wanted poster, complete with mug shot and offered reward. Funny thing, though. It was always 10 minutes to five o'clock PM in our room...

Thanks go to Jim and Pam, Jack and Bob, Dawn and Roxanne, Scott and Amber, and everybody else that helped in various ways, for a wonderful and successful event! 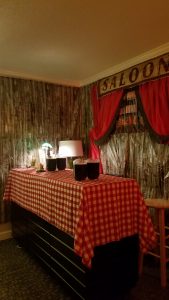 The best news of all is that we won FIRST PLACE in the party room competition! That means we received money to put towards next year's room. What will it be?

Great job, everyone, and way to have a great time!

Trixie May (aka Mary)