Remember earlier this year, when the Space Force (the military branch, not the comedy show) unveiled its new logo and was instantly targeted by countless people for using the Star Trek Delta Shield? Last week they unveiled a newer new logo, together with the official motto Semper Supra, which means "Always Above." It still looks like a Delta Shield, but they have made it very clear that they've been using a similar symbol since 1961!! 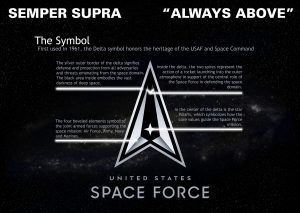 Check out more details, including specific details of each aspect of the logo, at the United States Space Forces twitter account @SpaceForceDoD