I hope everyone is doing well and enjoying our emergence into spring. That may be a little optimistic with March coming on, but temperatures above 40 are in sight! Woo hoo!

I'd like to give a shout-out to our club members that are participating in the Twin Cities Regional Science Fair this week. The 2020 fair was one of the last things we did before things closed down, and the organizers have found a way to keep the student experience alive and well. Judging of papers took place over the last few weeks and was all done online. Today is the last day of virtual project judging, which has been fun because you get to watch each student in a 10-minute recorded presentation. This is great for a judge since you get to view the student without the outside influences of friends, noise and nerves that usually accompany an on-floor discussion. On Friday, the judges will get to (virtually) interact directly with the students whose projects they have judged. All in all, it's a great solution for the prickly problem of hosting a fair during the pandemic!

Speaking of Friday, plan to join us for our virtual pizza party this Friday after the Science Fair is over. We'll begin at 9pm, so order or bake your pizza, grab a beverage, and get on the Zoom! Details are below.

Finally, thanks very much to the few people that have sent recipes for our 2021 cookbook. Drop yours in an email and send them to me at .

Star Trek: Discovery's fourth season has been in production since November. Also, Spock actor Ethan Peck posted some pictures from Toronto last week, leading fans to the assumption that Star Trek: Strange New Worlds is beginning rehearsals. In addition to the three live-action Star Trek shows, there are also two animated shows in production. The second season of Star Trek: Lower Decks is coming this year, along with the first season of the kids show Star Trek: Prodigy.

Check out some details HERE

We're having a late-evening pizza get-together at 9pm on Friday, and you are all invited! Grab your pizza, beverage and favorite blankie and join us.

Don't eat pizza? Eat something else! Aren't planning to comb your hair or get out of your jammies? Us either! Actually, those of us that are judging for the Twin Cities Regional Science Fair probably will have to get gussied up, just because the students are going to be looking at us, but you don't have to! Here's the link:

We are now officially into our 12th month of virtual activities! Here are some great ideas for you to do on your keyboard:

We're coming out of our cold snap now, so here's hoping for warm days ahead! See you around the Galaxy!

Do you know the amazing story of Nichelle Nichols' impact on the space program? A new documentary, released yesterday, tells this story. Woman in Motion debuted on the big screen via Fathom Events last week, and it's now available digitally. Although we didn't need any more reasons to respect and appreciate this amazing actor, there's so much more!

From a review on treknews.net:

"Nichelle Nichols, known to Star Trek fans around the world as Lieutenant Uhura, has led an amazing life thanks to her role on that famous show and its subsequent movies. But in addition to leading the charge for black representation on television, fans may not have known that Nichols brought that determination and representation to Starfleet’s real-life present-day counterpart, NASA. Thankfully, Woman in Motion sheds light on Nichols’ role in bettering NASA’s diversity, a goal that has had rippling repercussions ever since.

While the documentary revolves around Nichols’ hard-hitting efforts to bring thousands of non-white applicants to NASA in the 1970s, the documentary first makes sure to tell the story of Nichols herself. Using both archive interviews and more recent productions, viewers learn from the actress herself about how she came to join the television business, starting initially as a singer for Duke Ellington before traveling to California to began her TV career."

You can check out the details and access the movie HERE

It's still Valentine's Day week, after all. Before you lose the rosy glow of the red holiday, check out this list from startrek.com: some of the most romantic moments of Star Trek. Mary appreciates #1 because it harkens all the way back to the beginning! Check them out HERE

Good guesses were made, but nobody correctly identified the little onesie-wearing baby in last week's newsletter. It was Jim M, our very own trivia master! Thanks for playing and I need some more pictures!

Are you in the mood for a Croquembouche, olive tapenade with crostini, or baked artichoke hearts? 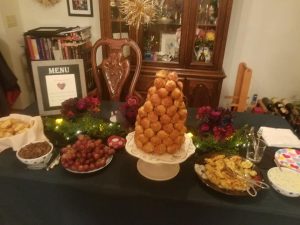 Do you want to pour molten chocolate over your very own Horta Egg, revealing the triple-chocolatey yumminess inside? 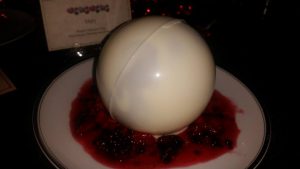 Look no more! Send in your recipes, and once we get enough you'll have access to these and many other amazing culinary roadmaps!!

Last year, the last in-person thing I did was volunteer at the winter fundraiser, Bouquets.  It's an event full of good food and drink, beautiful warmth and scenery in the middle of winter.  Normally the ticket sales are limited by the size of the Conservatory, but not this year.

Visit comofriends.org/events/bouquets/ to see all the options, from a free-will donation Live presentation at 7PM, to a few tastier box with wine, beer, and food samples.  Lynne and I will be there in spirit(s), consider joining us. Tickets are available online, and all proceeds benefit Como Friends, the charitable arm of the Como Zoo and Conservatory to fund educational programs and Zoo improvements.

Can you feel your face yet? Kinda cold here in the North, but you'll get all warm and cozy when you tune in for this Saturday's meeting. The Zoom information is below.

We're ready to start collecting recipes for our next cookbook. Email your recipes to me and I'll get them in the list. Remember that wonderful dish you brought to the last potluck that made everybody oooooh and aaaaah? That's the one to send, along with family favorites or fun things you've seen online. We'll be featuring the menus from past Valentine Dinners, too. The best part of compiling a cookbook in the modern world is the ease of copying and pasting your recipes right into the email, so bring 'em on. You can send as many as you want to

Don't forget that tonight is TC Trek Trivia. Anyone is welcome to join our team, so send me an email by 6pm and I'll include you. The fun starts at 7pm and the theme is "Love in the Time of Star Trek."

Finally, don't forget our upcoming pizza party on February 26th! We'll discuss it at the meeting and in upcoming newsletters.