We had a great meeting this month, with lots of information shared. Our new calendar of events will be added to the website so you can see all of the plans. They include these upcoming additions:

We also added lots of other fun plans, like Axe Throwing, a Brewery Tour, St Patrick's Day Beer Tasting Party, Feed My Starving Children food packing, virtual scavenger hunt, Como Zoo activity, and more! If you have other ideas, they are always welcome.

Well, that's it for today. I'm off to consider whether it's Mugato or Gumato!

We've made changes in our plans for the Chuckwagon social once again. There is a lot of uncertainty about the availability of the site and our ability to host the event, so we are postponing it until 2022. Although this is our largest fundraiser of the year, our lack of spending this year (due to limited events) means we don't have to worry about missing the chance!

One part of the event that will proceed as planned is the annual 50-50 raffle. This drawing benefits charity and also carries a great chance of winning for one lucky person. Half of the ticket sales goes to the winner, so the more tickets sold, the more you win. The tickets are $5 each or three for $10. You can purchase them through the website via PayPal or send a check to Pam. We will do the drawing on the originally planned date of October 17th. The odds of winning are really great, and so is our chosen charity - St Jude's Children's Research Hospital - so buy some!

I hope everyone will be able to join us at the General Membership Meeting this Saturday. We'll be virtual this month, via Zoom.

As always, September means two things for us (well, aside from Star Trek Day, but that goes without saying). First, remember that dues are due for everyone, regardless of join date. Please follow the instructions on the Join Us page. You can pay by PayPal, Venmo, or by mailing a check. There's a great article (coincidentally dated September 8, 2020) on the website if you need additional details.

Second, September brings a new calendar of upcoming events. Your Governing Board has put together a plan and will share it at Saturday's meeting. We'll go through it from October 2021 to December 2022 and give everyone an opportunity to ask questions and suggest additions, then officially vote in our plan. Remember that anyone can suggest an event and that we'll consider pretty much anything. It helps if you're willing to lead the event, of course, but it's not mandatory. We're looking forward to the discussion.

After this weekend's meeting we will share several important updates, so stay tuned for next week's newsletter if you can't make the meeting! 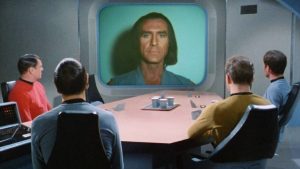 Join us on September 11 at noon for our September General Membership Meeting. The Zoom link is below. You can join by video or by phone.
We'll be sharing lots of information about upcoming events!

Greetings, crew! It's been 55 years since the first episode aired - can you believe it? There's a great lineup planned today, and here are some details from startrek.com:

"Join Paramount+ and fans from around the world for a live-streamed celebration of Star Trek Day on Wednesday, September 8th at 5:30 PM, PT/8:30 PM, ET. Live from the Skirball Cultural Center in Los Angeles, California, Star Trek Day will be hosted by Wil Wheaton and Mica Burton and feature back-to-back in-person conversations with cast members and creative minds from the Star Trek Universe, legacy moments with iconic cast, plus surprise appearances, announcements and reveals throughout. The live-streamed celebration and additional information on Star Trek Day programming and initiatives can be found at StarTrek.com/Day.

"On September 8, 1966, Star Trek graced television screens for the first time with “The Man Trap,” the pilot episode of Star Trek: The Original Series. On that day, Star Trek creator Gene Roddenberry introduced audiences to a world that championed diversity, inclusion, acceptance and hope. Fifty-five years later, Paramount+ will honor this important day and the franchise’s enduring legacy, with the service’s second annual Star Trek Day celebration, providing fans with a memorable way to enjoy and celebrate all things Star Trek.

"STAR TREK DAY GLOBAL LIVE-STREAMED CELEBRATION (5:30 PM, PT/8:30 PM, ET)
Join hosts Wil Wheaton and Mica Burton for over two hours of free live-streamed panels and programming that will reunite iconic cast members and creative minds from 10 Star Trek television series, as they gather in person to celebrate 55 years of Star Trek. In addition to the panels, the programming will feature legacy moments with iconic cast members diving into memorable Star Trek stories from years past. In addition, there will be a special Roddenberry Legacy panel, in honor of Gene Roddenberry’s 100th birthday. Jeff Russo, the composer of the main themes for Star Trek: Discovery and Star Trek: Picard, will be at the helm of the Star Trek Day stage with a live orchestra, performing Star Trek music throughout the evening.

"The following panels will include the casts and creatives from iconic Star Trek television series:

"SPECIAL STAR TREK DAY MERCHANDISE AND SALE
On September 8th, fans can use the code “STARTREKDAY20” for 20% off sitewide at Shop.StarTrek.com, which includes a curated Star Trek Day collection.

We had a great time at the backyard movie night on the 13th! Over 20 of us enjoyed the first episode of Star Trek: Lower Decks' second season. We had a great meal, complete with Jersey Mike's sandwiches, chips and desserts. Then we had popcorn and watched a couple of scary Star Trek episodes - what could be more fun?

Speaking of Lower Decks, if you haven't watched the second episode yet, keep your remote in hand. There are so many visual Easter Eggs that we froze the picture over and over just to enjoy them!

If you're at the Fair, stop by the North End Event Center to say hi. I'll be there every day until at least 9am!

We'll meet this Saturday for a fairly brief meeting to update you on happenings in the club. Join us by Zoom at noon. After the meeting we'll hang out and socialize for a while.

Mary Pucel is inviting you to a scheduled Zoom meeting.

I hope everybody's doing well. To those who are going to CONvergence - have a great time!

Speaking of CONvergence: As you know we were no able to hold our annual blood drive during the convention this year. We don't want to miss the opportunity for members to help save lives, nonetheless. Here's how you can find a blood drive: Go to redcrossblood.org and search for a blood drive near you. There's one near you, no matter where you are. If you're going to the State Fair, there's one every day. You can make your appointment for any drive just like you always do for our drives. Thanks for going the extra mile while we can't offer a quick and easy place to donate!

Remember when we asked for cookbook recipes months ago? We are pretty short on side dishes, beverages and candy/snacks. If you have any good ones, send them over to me at . Thanks in advance!

We all do, right? Riiiiiight.

There's a new book about a missing piece of the Star Trek story. Remember when Uhura got her memory wiped by Nomad? Remember how she was back on duty in the next episode as though nothing happened? Make sense? No.

Christopher L. Bennett's new book - Star Trek: The Original Series: Living Memory - "turns the spotlight on Uhura, one of Star Trek’s lesser-explored characters, and fleshes out the psychology and the consequences of what happened during “The Changeling”—and it turns out the fate of the galaxy may depend on recovering her lost memories."

This sounds fun, doesn't it? Check out more details HERE.

For the first time ever, the iconic Star Trek: The Original Series will be released on Blu-ray in highly collectible Steelbook packaging. The limited-edition Blu-ray Steelbook arrives September 7, 2021. You can pre-order your copy HERE.